A strange assortment of travelers have met eachother in an even stranger place: a place outside dimensions, outside any universe that exists... These people do not belong in their universes, and the only one that will be allowed to remain, is the only one left standing.

So it's a randomly hilarious OC RP with violence, possible shipping, and interactions that were not meant to be. You create and roleplay as an OC based on any fictional universe.

Name: Aruktas
Series they're based on: Dragonball Z
Age: 125
Gender: N/A
Species: Namekian
Personality: Aruktas is very laid back, and generally doesn't fight opponents he sees as weaker. When he meets a "worthy opponent" he fights until said opponent is defeated.
Bio: A Namekian who realized the finer uses of Namekian 'fusion' - by assimilating weaker Nameks, he could increase his own power level. Having lived in the wilderness of the planet, he was never taught right from wrong, and thus sees this as perfectly acceptable "kill-or-be-killed" behavior.
Appearance: Powers/Abilities:
Ki Control, which allows him to shoot ki blasts and fly.
Super Speed and Strength.
Telekinesis and Telepathy.
Healing.
Assimilation of other Namekians
Materialization of small objects out of thin air.
As a Namkeian, he can regenerate and stretch his body, as well as hear far better than any human and resist extreme conditions. He also is very world wise, being over one hundred years old, and possesses the knowledge and fighting experience of thousands.
Weapons/Items: Just the clothes on his back.

Name: Karina Ekaterina
Series they're based on: Magical Girl Lyrical Nanoha
Age: 16
Gender: female
Species: human
Personality: Acts like a hyperactive idiot most of the time, but is alot smarter than she appears.
Bio: Her parents were abusive criminals that forced her to help them with their crimes and treated her like crap, while pretending to look out for her best interests. She started to doubt them around the time that they used her as a human shield in a fierce magical firefight. After that, she decided to become an enforcer and to help people out so she wouldn't end up like her parents.
Appearance: Violet hair, blue eyes.
Powers/Abilities: Is a mage. Can use long ranged magic and barrier magic, but her specialty is close ranged attacks.
Weapons/Items: Her device takes the form of a magical beam axe.

Personality: Reina is not quite mature, despite her age. She likes ordering others around, but at the same time follows every order given by her own superiors. She is semi-brattish, and very much a tomboy. However, she has her soft side, which shows that she's not as hardened as she'd like others to believe. She loves a challenge, and when faced with one will try at it with all her might. She's a rather big eater for someone her size. She is oddly not afraid of death, and will keep fighting until she can no longer move. She tends to yell at people who do things she perceives as "stupid".

Bio: When she was a young girl, pirates killed her parents. Ironically, it was another pirate that saved her and raised her as his own daughter. She dislikes being viewed as less than other people, so she has worked hard to get where she has. This has resulted in her bossy personality, as she likes to take charge when the opportunity presents itself. Her personal view on piracy is that it's an expression of freedom, so while she sails under the skull and crossbones, she is far more likely to attack other pirates than innocents and Marines. The trauma of her parents' death awakened hidden powers within her that the pirate trained and enhanced with a Devil Fruit, which has made her into one of the far more feared pirates, "Snow Queen" Reina.

Appearance: (to be put)

Personality: She seems to have two different personalities each with their own look and powers. Her dominate personality seems to be Kuro in which she becomes cold and distrusting of others. She can be temperamental and violent at times, especially in the presence of idiocy. She keeps herself closed off from others, not bothering to open up.
Her other less active personality is Hikari in which she becomes the complete opposite of Kuro. Hikari is open, friendly, and very trusting of others. She rarely gets angry at people and deeply cares about their feelings.

Bio: Kuro began as your normal middleschool girl until one day she discovered her elder sister, Hikari, had made a deal with Kyuubey and became a magical girl. During one incident, Kuro was forced to make a wish in order to protect her sister and thus on that day began her life as a magical girl. However, as luck would have it, her sister's body was completely destroyed in one of their many battles together. All that remained was her Soul Gem. It's believed that the trauma of the event caused her to create her second personality. The personality that took on the name and traits of her elder sister even her very powers. 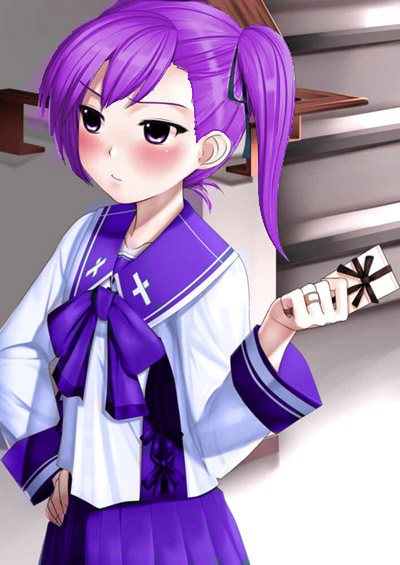 The outfit in the picture is her magical girl costume of the Kuro personality, the Hikari personality has a similar costume except everywhere you see white, there is black instead.
When not powered up, she wears a blueish purple shirt and jeans.

Powers/Abilities
Kuro Personality:
Super strength which allows her to even lift a massive truck with ease
Knows some martial arts
With the use of her gauntlets, she can create glowing energy around her hands to shoot at her opponent by punching the air or to hit them head on with her glowing fist.
Abnormal healing, but not to the extent of regeneration.
Some other forms of magic

Hikari Personality:
Can create an infinite number of knives that can be used for close combat or thrown at the opponent.
Has the power to make metal objects explode meaning the knives she throws could be made to explode at any moment.
Abnormal healing
Some other forms of magic

Name: Geoffrey
Series they're based on: Fairy Tail
Age: 17
Gender: Male
Species: Human (Dragon?)
Personality: Constantly depressed.
Bio: Meeehhhhhhh
Appearance: (will find picture)
Powers/Abilities
Dragon Slayer: As a child of a dragon (adopted) he has the power to manipulate Darkness perfectly.
He eats Darkness to regain energy
He is immune to dark spells
He can fire off Dark magic and make shadows tangible
He can make shadows that are spies with which he can see through
He can see in the dark perfectly
He can move incredibly short distances by dropping his physical self into a shadow and appearing from another shadow, but the shadows have to be very dark, or there has to be no light whatsoever.