Post your OCs for Homestuck here! The current RP is humans only, unless everyone votes to use a different species instead. Also of note: Everyone is age 13, somehow.

Here's your template! "Traits" are something you need to have filled in from the start, but "Stats" can be left blank and filled in as the game progresses. The Inventory section is just there if you want it.

Traits
Name: Your character's name
Gender: Your character's physical gender (make a note about mental if you're playing a trap)
Appearance: Hair, eyes, skin color, that sorta thing. Use an image if you feel like it
Chumhandle: Your character's screenname, for use in communicating long-distance. Generally two words, only the second word having a capital letter (example: carcinoGeneticist)
FetchModus: What method you use to store your inventory. This can be as simple or as complex as you please.
Interests: Some things your character likes, to give us an idea of their personality.

Stats
strifeSpecibus: What kind of weapon you prefer. Designating a weapon (bladeKind, rifleKind, clubKind, etc.) allows you to store them in your inventory instead of physically carrying them.
Title: To be filled in later, when your character truly 'starts' the game. If you really want to, and know the implications, one person may put "Hero of Space" here as filler.
Sprite: The being that advises your character. They'll be created as part of the plot.

Sylladex
Your inventory, basically. Feel free to use this to keep track of your stuff, though you can use other methods if you wish.

Name: Roxane Lawrence
Gender: female; occasionally mistaken for a guy though.
Appearance: short brown hair, and brown eyes. Flat chested. Dresses like a guy; despite usually having a venus symbol on her clothes.
Chumhandle: counterfeitMale
FetchModus: Schrodinger's Modus: A completely random modus that changes the order of the items every time one of them is inserted into it, and almost never gives her what she wants. (though sometimes gets her what she needs)
Interests: unicorns. However, she doesn't let on that she finds them to be awesome, as it embarrasses her to like them so much.
Stats
strifeSpecibus: boomerangkind
Title:
Sprite:

Traits
Name: Alys Fletcher
Gender: Female
Appearance: Short, bright blue hair, freckles, wears a black shirt and blue jeans. The symbol of the Sun, ☉, is always on her clothes, though it is colored green 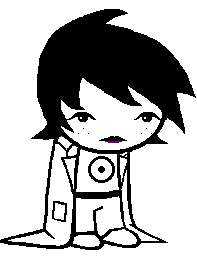 Chumhandle: conventionallyCostumed
FetchModus: Prize Bag: Can take out an item at any time, but the first time an item is placed into the Sylladex, it is covered up. Selecting a covered up item gives you a random item from the selection of covered items.
Interests: Cosplaying, particularly anime; anime; Twilight Crew; shipping, particularly of the yaoi variety

Chumhandle: etherealCosmologist
FetchModus: Planetary Chart - Each item is only accessible when the planets align juuust so. Of course, getting what you need when you need it can be rather hit or miss.
Interests: Astronomy, Magicks, Bad science fiction, Disney movies and memorabilia. 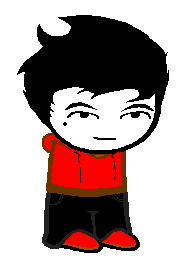 Chumhandle: professionalEncyclopedia
FetchModus: Time Modus - The number of letters in the name of each item pertains to the number of seconds it takes for the item to pop out. For exampled, magazine will take eight seconds. So the longer the name, the longer the wait.
Interests: Everything about practically anything. There's a reason he's called an encyclopedia...

Chumhandle: ropeAxe
FetchModus: Puzzle modus, has to solve a puzzle to get the desired item.
Interests: Likes games, animals and music.

Chumhandle: falseConspiracy
FetchModus: conderadictory, just like array except when picked up stores two versions of the same item in the opposite color spectrum eg. black is to white red is to blue green is to purple
Interests: pixelated RPG games, skittles, jellyfish , Conspiracy theories, German battle tanks

^Feel I should warn you that I believe this RP is dead, but if you want a Homestuck RP then please feel free to discuss it in the chatango chat on the home page, to see who might still be interested.