[ ]Ask about what else your grandfather did.

[ ]Ask about what else your grandfather did.

Feeling a little mischievous, still, you decide to ask a very odd question before going for the more serious one. "Did he have anything... ecchi?"

"Ehhhhhh?!" the maid's eyes go wide, and her face flushes. She's obviously taken aback by this question seemingly coming out of no where, with no idea how to respond. You feel a little bit bad for her in light of this, and decide to quickly return to the previous line of questioning.

"I was only joking, eh-heh," you say, rubbing the back of your head sheepishly, "Sorry about that... So... what else did my grandfather do? Aside from the weird occult stuff..."

The maid begins to recover from that question, the redness fading from her cheeks. "Well... as long as I knew him, he mainly just... stayed inside at home. But he was kind to me, and to the other workers here... but he always seemed somewhat... sad and distant, at least when he wasn't talking about the occult. I never really learned why... I really don't know much about what he did before I started working for him, unfortunately. I know he worked, but... he never told me what he did. You might be better off asking Saito-san, when he's not busy... sorry..."

[ ] Ask her about herself. Gun for the pervy stuff, too!

[X] "Where can I get something good to eat now? I'm completely FAMISHED, you know?"

[ ]Ask her about herself.

You can't help yourself, you decide to ask the maid some questions about herself, and... even though you feel slightly bad about it, you decide to tease her a little. It seems like it could be fun, right? "Well... I guess since you can't tell me more about my grandfather... I think I'd like to know more about you."

"E-eh?" the Maid is a bit surprised to hear this. She quickly looks away, cheeks flushing slightly. Apparently the attention embarrasses her. This makes you feel a little bit worse about what you're about to ask her. "I'm not that interesting... why would you want to know about me?"

"Well, I might as well learn about one of the people who cares for the home I'll be staying at, right?" you reply, "So... anyway... what are your three sizes?"

You didn't know it was possible for a person to get to quite that shade of red.

"E-e-eeeeehhh?!" her eyes go wide with shock, her face growing redder still. Seriously, how is that even possible? "Wh-wh-wh-what? Wh-wh-why d-do y-you... wh-why..."

"Well, I mainly want to learn your bust size," you reply. Even if you feel kind of bad about it, you still get a bit of a kick out of her reaction. "So you could just tell me that."

"Waaaaaah!" she covers her face, dropping to her knees.

With a sigh, you reach down and help her back up, "Sorry, I was... just teasing you. You don't have to tell me anything like that, eh-heh."

"I do really want to know more about you, though."

Yeah, too lazy to type. 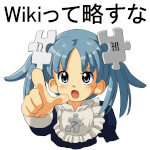 "What are your interests?" you ask. You figure that it'd be easiest to learn about her through learning about what she likes to do. Who knows, maybe you shared a few interests? It was kind of nice talking with the maid, even when you weren't just teasing her. Hopefully that didn't make her want to completely stop talking to you...

"My interests?" she blinks. She can't seem to understand why you're so interested in her. Perhaps it's because she views herself as 'just a maid'? You can't be sure, but it's as good a guess as any. "Um... I like reading, not the kind of stuff that's in the mansion's library, but... fantasy... science fiction... things like that. And, um... I'm kind of interested in some games, too..."

"What kind of games?" you ask, curiously.

"Um..." she seems a bit awkward when talking about this subject, "Well-"

Just then, your uncle(ignore the gravestones and stuff) appears from the right, Alice following behind him. He spreads his arms wide, with a grin. The one major thing you recall about your uncle Johnathan is that he's very-

"Greetings, my relations! It has been so very long since I have seen you!"

The maid seems startled by this, and retreats a bit. You wonder if she'll be willing to keep talking...

[ ]Think about how weird your uncle is, attempt to talk to the maid again.

MAIDS ARE THE SUPERIOR SPECIES.

You decide to give the maid a break, and talk to your uncle. You haven't seen him in ages, after all. Glancing back, you notice the maid is gone... you feel that you'll have to talk to her again at some point. Even if you teased her, she seemed friendly, and nice... and she was pretty, too. Turning back to your uncle... well, he is pretty weird...

"Um, hi uncle," you greet him, not sure what else to say. He immediately turns towards you.

"Oh, how much you've grown, Ae!" he greets you, very... loudly. You notice that he's managed to mispronounce your name very, very badly, and feel that you should point that out.

"Oh, right. Well, anyway... you've grown so much! You were only eight when I saw you last, and look at you now!" he says. You feel like the loudness of literally everything he says is a bit unnecessary... Also, the fact that you were eight when he last so you is kind of obvious, given...

"It was ten years ago, uncle," you reply. Your uncle was always weird, as far as you can remember. Maybe that's why your cousin was a bit odd, as well.

Shiro approaches your uncle. She's a bit confused, obviously not even remembering having an uncle given how young she was at the time. "Ojisan?"

Immediately, your uncle scoops her off of the ground and hugs her tightly. She lets out a startled yelp, clearly not pleased with this development in the slightest. You recall the kidnapping attempt on Shiro, where a man, much like your uncle in appearance, had picked her up and just tried to run off with her. Shiro just would've been angry if she actually knew him, but... she doesn't know your uncle, at all.

You know your uncle doesn't mean any harm, but Shiro's clearly startled and a bit frightened.

[ ] Attack your uncle to free Shiro. NO-ONE MESSES WITH THE LOLI. D<

There's no time for hesitation. Your uncle... he might be your uncle, but he'd scared your little sister. She might be bratty sometimes... but no one messes with Shiro! You leap forward and tackle him to the ground, causing Shiro to flop out of his arms. She looks kind of bewildered. Alice is shocked.

You quickly get off of your uncle and stand up, rubbing the back of your head. You're somewhat embarrassed, but... "Uh... yeah, well... Shiro-chan was scared, and it's the first thing I thought to do, and, um..."

How do you respond?
[ ]Help Shiro up.
[ ]Help your Uncle up and apologize.
[ ]Walk away awkwardly.
[ ]Free(Please be somewhat sensible)

[ ]Help Shiro up and apologise... after giving him a warning.

[ ]Help Shiro up and pat her head reassuringly.

[ ]Help Shiro up and apologise... after giving him a warning.

You reach down and help Shiro up. She still looks kind of upset and bewildered at the same time. Pulling her closer to you, you pat her on the head reassuringly, before turning your focus to your uncle as he gets up. He did something that was, in your mind, very far on the wrong scale of the spectrum. Even if her didn't realize how bad what he was doing really was, it was still extremely wrong.

"Don't pick Shiro-chan up like that again," you say, stepping in front of Shiro yourself, "She doesn't like it. But... I'm sorry for kicking you down like that. It was the first thing that occurred to me, after I saw how scared Shiro-chan was..."

He gets up, with a little help from Alice(who quickly goes back to reading a book with a tentacled monstrosity on the cover). He's... still smiling, "Ah, that's fine! What's a little tackling between relatives after all, eh? I won't do anything like that, I didn't know it would scare her."

Your parents don't seem to know how to react. Behind you, Shiro shivers, and then yawns. The Butler and the Maid return, seemingly from no where.

You note that the sun has vanished entirely. The mansion was so brightly-lit, you barely noticed...

"Ah," begins the butler, "Kobayashi-san and myself can help you with your luggage, if you want to get settled in."

They both descended upon the luggage. Shiro, still frightened, has now began clinging to your arm. That memory was a terrible one, to make her do that...

[ ]Give Shiro a hug, go to help the maid with your luggage and Shiro's. Bring Shiro along.