When They Cry: Higurashi Character Template

When They Cry: Higurashi Character Template

Personality: Hikari suffers from multiple personality disorder and thus has two different personalities. Her Hikari personality is usually quiet and
reserved. She is very polite and thoughtful, trying her best to please the people around her. Her other personality which refers to herself as
Akira is loud and boisterous with an outgoing yet condescending attitude about her.

Appearance: Even though she is fourteen, she is small for her age, not much taller than Satoko or Rika. She has curly blue silver hair and red eyes.

Skills:She is an intelligent and studious child. She also seems good atworking with her hands and creating things out of the simplest of
materials, be it something she sewn together or something more complicated like a airplane model.

Hobbies: She likes to read, write, play games with the club, and make things

Bio: When she was younger, she lived with her bipolar mother who would beat her when she was having one of her moods. The beatings were so bad and frequent that she unconsciously created Akira who would take the beatings for Hikari. And on one of these days, Akira (Hikari) had pushed her mother down the stairs and effectively killing the woman. Because of Hikari's age and the fact that it was in self defense, the police puther in custody of the village where she moved in with the Sonozaki's at the request of Mion. In return for living there, Hikari has to work hard to earn her keep, and even works delivering newspaper to get some money to pay for her rent. Akira is still with her though, and Hikari will even hold a conversation with her other self. Akira, however, doesn't take control of Hikari's body unless she feels Hikari is threatened or if Hikari's mental state grows weaker. Only Mion knows of Akira's existence, since Hikari choose to keep it a secret from the others so they wouldn't worry too much about her
__________________

Personality: she's just a BIT crazy, but she clearly loves her job as a private investigator. She especially enjoys the ridiculously crazy cases, and is oddly cheerful. However, she gets bored with it at times, considering most of her cases involve getting pictures of cheating husbands, and cheating wives.

Hobbies: Used to be somewhat of a prankster, though she's since grown out of it.

Personality: Kind and friendly, if not a bit socially awkward. He has a thing for the darker side of life (supernatural, paranormal, creatures of the night, etc.) and whenever he gets excited about the dark side (as he calls it), he tends to have a "dark" chuckle. He is also a bit of an otaku. 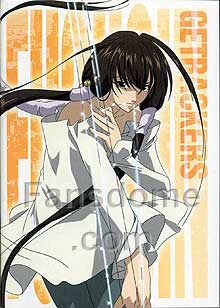 Skills: Adept in martial arts (though is not an expert) and very skilled at cooking.

Bio: Born into a well-off family, Misaki has always looked feminine which caused his mother to dress him up as a girl (mostly because his mother wanted a girl in the first place). His mother died when he was seven because of cancer, which left him severely heart-broken. To keep the memory of his mother alive, he continued to dress as a girl, but that resulted in his father beating him because his father thinks it's not right for a boy to dress as a girl. But despite the beatings, Misaki continued crossdressing. The beatings went on until social services arrested his father for child abuse and Misaki was sent to a psychiatrist to "cure" his thoughts on crossdressing. It didn't work much, since Misaki still crossdresses, but he doesn't do it for his mother's memories any more. He is also comfortable being a male and actually looks very handsome when in male clothing.

Personality: Nice and ind, but knows some things that wuold best be left unknown

Golden hair anmd blue eyes, looks very much like beatrice (might as well, after all, bern IS rika)

Skills: Is good at anything she does, actually sticks close to the shore, talking about a 'rokkenjima'

She was found as a toddler on the shores of a beach and took to hinamizawa. You know, all the sudden, 'poof' there she is. Wants to befriend people, but just seems to getr father away from them when she tries. She is usually muttering about a place called rokkenjima