The basic idea behind this topic is to pick two Touhou characters you like and make a kid(s) for them. Gender need not be an issue in Touhou, after all with Yukari around anything it possible. You can use canon characters, OCs from a Touhou RP, even crossover a character from another fictional story with a Touhou character.

Basic Info for the child will be as followed:

Abilities: sealing/purification powers, high intuition, ability to call on the powers of the Gods, flight, and puppetry

Personality: Much like Reimu, Arisa tends to be really lazy and slacks off often, not wanting to get off her lazy miko butt unless she has to. She gets very easily annoyed by others especially those who don't leave her a donation. Despite her general bad attitude at times, she can be quite nice and friendly to people she likes though she is still just as prone to get annoyed by them.

History: Arisa is the beloved daughter of Alice and Reimu, though her Alice-mama tends to be strict when she starts slacking off. She is the next generation of hax miko and is often kicking the ass of troublesome youkai. She has not yet solved any incidents without her mother yet, however. As she is still in training and hasn't taken over her mother's place as the Hakurei miko.

Personality: Michi can come off as the cool and uncaring type. She has a bit of a deadpan and will always be the one to point out the flaws in her Mistresses plans. She takes her duty as a maid as seriously as her mother, but that doesn't stop her from joining her 'papa (Meiling)' out for a nap occasionally.

History: Michi grew up in a pretty normal environment (despite living in the mansion of a vampire). She cared for and given the best of education (meaning Patchouli taught her), everyone in the mansion adored the little tyke from birth. Even Flandre would be given permission to hold her, and thankfully didn't 'kyuu' the baby (Flandre: I only 'kyuu' bad people.) Michi looks up to her mother, Sakuya and used to always try to mimic her. She also loved her doting 'papa' Meiling, from who she picked up her sleeping habits. She seems to get along with her older half sister, and she never questions how she even got said half sister.

Abilities: The power to sense danger

Personality: Rori is slightly more intelligent than her mothers' friends from Team 9. She is also a little cowardly, and will be quick to point out that something dangerous is an extremely bad idea. However, she'll still go along with it because she doesn't want to disappoint her friends. She likes to sing as much as Mystia, and is the only thing she is confident about. 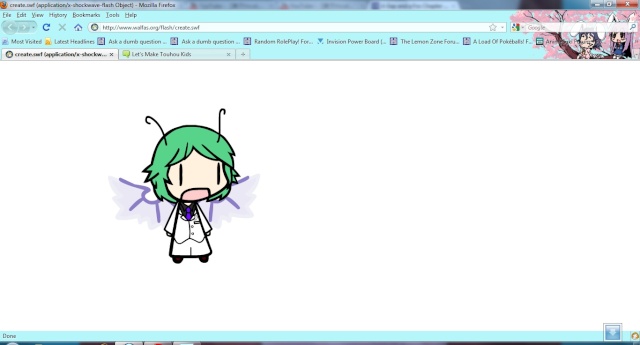 History: The daughter of Mystia and Wriggle, she is often mistaken for a boy (much like Wriggle.) Her parents loved their daughter greatly, but also tended to be overprotective of her at times, especially considering how her parents were often treated like snacks by stronger youkai. They were sure to teach their daughter how to not get eaten.

Abilities: Magic, and control over insects.

Personality: tends to steal alot and is oddly protective of insects. despite this, tends to be friendly, and charismatic. Like both of her mothers, she seems to have a way with the ladies.

Abilities: Marital arts and control of chi, Disco, Able to read the atmosphere.

Personality:With a strong sense of duty and justice, Meiku often takes it upon herself to right various wrongs and attempt to stop any