Because 4 new RPs in the past 4 days just wasn't enough...

Name:
Gender:
Role: Most people would be students but if you want to create a teacher, nurse or something feel free to try. Futhermore this would be the place to add what your character is. For example 'Student/Vampire Ninja Robot Maid'
Seat Number and Class: For students only. Aside from exceptions We'll be playing mostly in class 2A. Your seat number would normally be given alphabetically by your last name, but since we would need all names from everyone in the class to arrange that, feel free to pick any number.
Personality:
Appearance:
Clubs: Mahora has a club for almost anything you may imagine. From walking around aimlessly to superior engineering.
Abilities: What can your character do?
Backstory: nothing too special required, mostly here for those who do need to explain something in their pasts.
Other:

Name: Kotohime Yamaguchi ("If you have to abbreviate it, call me Hime-sama.")
Gender: Female
Profession: Student, class representative, yakuza princess
Seat Number and Class: Class 2A, seat 28
Personality: Cool-headed at all times, and although she rarely speaks at length, she doesn't mince her words when she does. She doesn't exactly look down upon others, and may actually genuinely care about some of her classmates, but most people find her somewhat unapproachable due to her appearance and familial connections. If anyone even thinks of threatening her in any concievable way, she will simply remind them about the "perfectly legitimate business" her family deals with. Although she's completely unaware of the supernatural history of Mahora Academy, she's open minded to an extent (she'll believe it if she sees it).
Appearance: Perfectly embodies the Japanese ideal of beauty, with her long, silky black hair, warm, soothing amber eyes and porcelain-like skin. She stands tall, not enough to be classed as a huge schoolgirl, but enough that she still stands out from the crowd, and she maintains an aura of grace and elegance no matter where she goes. In addition to her school uniform, she is always wearing a black fedora, and it is advised that you on no accounts try to touch it. She also carries around a violin case, which is odd as she's not part of the music club.
Clubs: Kotohime is a member of the school council, in addition to being a die-hard member of the literature club. It is rumoured that she is also the one behind the underground gambling rings spread across the academy.
Abilities: Kotohime has above average intelligence in most subjects, although she excels most in Japanese and English due to her love of classical literature. She's also reasonably atheletic, although it's not an area she excels greatly at. Due to her connections, she likely knows about almost every non-supernatural occurence in the school. Her family is rather well off, and so money is never really a problem for her.

Spoiler:
Crackshot with a tommygun.

Backstory: Kotohime was born into a family of "very nice people", and has spent her entire life learning the ways of "legitimate business." Her father has a seat on Mahora's board of directors, and decided that it would be the best place for his daughter to recieve education. Although she's never had any experience with the supernatural before arriving at Mahora, she's starting to find some of the occurences there a little bit suspicious... 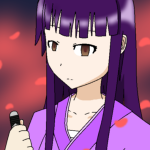 Personality: 'Loud and annoying' are probably her most defining traits. She apparently never developed an indoor voice, nor did she ever master the technique of whispering. She's also pretty darn cheerful and 'aggressively friendly'. Can also be categorised as 'harassment' by the law.
If there's anything that can get her down, it's reminders that she can't stick around Mahora, any subject that isn't P.E. and her father. Still, at least she bounces back extremely quickly, returning to her happy, aggravating self.

Appearance: Lucy stands at 5'2", with pale grey eyes, although she wears green contacts to keep up a more 'normal' look, and her hair is black, reaching her waist, and is always either tied into two, long ponytails or wrapped around her neck like a scarf. A blue or yellow bow may be tied onto her hair on occasion. Outside of her school uniform, Lucy also wears 'summer wear' pretty much all year round, with bulkier clothing only in the most extreme of weather.

Clubs: Presides over the 'Ultra Cheerful Students Alliance', which focuses on bringing cheerfulness and fun to the students at Mahora through 'any means necessary'. An unwritten rule of the club is the 'permission' to play pranks that others would find hilarious, even if you receive detention for it.

Abilities: Her 'natural' element is wind-based spells - even if she knows no magic whatsoever - and as a vampire, she can control bats - fairly useless as there aren't any around for her to control.
Lucy excels at sports of practically all kinds. Basketball, Volleyball, Track... even swimming, but only in pools for some reason...

Backstory: When Lucy was fourteen, she was bitten, although she can't quite remember by who, nor does she really care at this point. As a human, she had feared growing old and 'maturing', and sees her vampirism as an excuse to stay perpetually young in both mind and body. It has only been ten years since she turned, and the first drawback Lucy has found is the need to change location, due to her permanent youth, and came to Mahora one year prior. Although her personality can make it hard for others to really approach her without clawing their brains out, Lucy rather likes pretty much everyone in the school, and is already dreading having to leave - completely unaware that she might not be the only 'supernatural' being in the school. As for her parents, Lucy's father is her only relative, and they never got on well. When Lucy had been bitten, he had scoffed at the idea of her being a vampire (since vampires didn't really display any of the weaknesses attributed to them), and didn't even seem to notice she had stopped aging. Lucy had left as soon as she was able, to continue living as a young girl for eternity.

Other:
While not affected in the 'typical' way by vampire counter-measures, eating garlic can cause some rather... unpleasant problems for Lucy (It's such an embarrassment that she refuses to even touch the stuff), and staying out in the sun too long will drain her energy quicker, which could be a problem during a long-running sport, but she usually just exerts herself and collapses when she returns to her room, sleeping the rest of the day (or three) away. Naturally, she's much more prone to sunburn and sunstroke than most others.
Furthermore, due to Lucy's refusal to drink blood, she tends to bite things in her sleep. A lot of plush dolls have met their unfortunate end simply because Lucy decided to snuggle with one.

Personality: As might be assumed from the fact that she's in the same class as people fully five years older than her, Misako is highly intelligent, a prodigy in fact. What's lagging behind is her social development; finding people she could easily talk with has always been tricky. She's friendly, though, even if absolutely terrible at finding topics of conversation, so expect quite a lot of talking about whatever happens to be in her line of sight.

It takes an enormous amount of force to separate her from her stuffed toy, it's better to not even try it. Clubs: Strategy Game Club--less focused than the Go or Chess clubs, this covers everything from shougi to Risk. They've agreed to keep well away from anything like Warhammer whilst Misako is around, though.
Sewing Club--when she gets time, Misako likes to work on making another soft toy. She's rarely got time to attend this one, however, because of...
Magic Lessons--at least one of the mage-teachers at the school has agreed to teach her the basics, since her parents are unavailable.

Abilities: Water and Earth affinities; she can basically just disarm and do the most minimal of non-combat spells. She's interested in the stuff that mixes the two, though: plant-element spells.

Backstory: Misako's parents are mages and part of the Kanto Magical Association, which rather explains their choice of school and magical discipline, and (once Misako's sister was old enough) left both of their children at Mahora, visiting when they can. They've let to learn that their youngest child has been put in the same class as the eldest; they're kind of on the busy side.

Spoiler:
If this is before Negima by a few years, then there's plans to visit the Magical World over the summer.

Other: Shares a room with her sister, even if said room has a normal amount of occupants (three) minus her presence.

Name: Chikafuji Chika
Age: 14
Gender: Female
Role: Student/More advanced mage trainee
Seat Number and Class: 2A, Seat 14
Personality: Chika is a calm, rational, and affectionate bigger sister for Misako... but that takes effort. At all other times, she makes a valiant attempt to be calm but is naturally clumsy, and easily flustered and embarrassed. She does her best not to show her clumsiness around Misako, though. She is quite friendly when she's not flustered, and she enjoys company. She often tries to get Misako to be better in social situations, but tries not to push her too hard.
Appearance: Clubs: Strategy Game Club-She's not actually that good at it, she's only there to keep an eye on Misako.
Magic Lessons-Like her younger sister, Chika is a mage trainee.
Abilities: Affinities for Water and Earth. Chika excels at disarming spells. Her disarming spells, when normally they would simply knock the weapon away, send weapons rocketing through the air, like projectiles, off into the distance.
Backstory: Born, did her best to be a good mage and a good big sister for Misako, that's... about it.
Other: N/A