Monsters: Monsters are the results of mutants mutating once again. Some are clearly incapable of clear thought and rationality, others posses rational minds but a sort of odd form of thinking which most humans find dangerous. They don't look like mutants, but like animals or strange items. Others sustain their shapes purely via magic and maintain slime or bulbous forms. Higher classes may look like mutants but there are clear differences between them, such as monsters have no sexual organs and reproduce A-sexually or via trading spores to produce monsters of mixbreed. They are obviously mixing DNA trying to create a more powerful monster class.
Form of power: Magic
Amount type: Rare outside of the pit, thousands in it.


Humans: Humans are perhaps the most plentiful, wether it comes to completely organic or artificial. After the monster and human war human kind was nearly extinguished. Artificial machines were used to improve the rate of human growth, birth, and even artificial humans were made. Using shift collars humans are much more in control of their psychic powers and abilities.
Form of power: Controlled Psychic powers and weapons
Amount: Lots.


Mutants: Mutants are feared greatly, most reassemble bi-pedal human looking animals, they are just starting to take on features of their monster forms. If these things were in the past you could often say that they were Vampires with wings and claws or some looked like demons. They have more advanced powers and are clearly overall more powerful in physical power however they sacrifice control over powers, often losing control when angry. They live in the slums and get their powers from eating flowers.
Form of power: Strong psychic power
Amount: Many

Biodroids and android: The most physical and prepared weaponry designed race originally designed to protect humanity. They are the strongest physical race of all and each is powered by solar batteries that store up the days light source which keeps them functioning for prolonged periods of time. Should the be out for many days they have an area within the city, called the sun shrine where they may recharge their batteries under UV lamps. Biodroids themselves range from small androids to doll like creatures. Androids range from battle military machines girl and men looking machines in armor with beam swords and high tech shields. Yes there are even pleasure modules for brothels but every machine is capable of great feats of strength and has hidden weaponry.
Form of power: Strength and weaponry. This is the only class that can use guns.

If Homonculous isn't an option in this, please just tell me so and I'll change my profile accordingly. She'll probably end up an android or something, but this works better if she stays Homonculous.

Sexuality: ??? (She's working out how to love other people at all, but she'll come around)

Weapon: Whatever she can get her hands on. Doesn't have the ability to carry things around.

Powers: Really fast regeneration, though not "Wolverine" levels. Basically, if she gets cut or scratched, the cut goes away after just a few minutes. But if she gets a broken bone, it can take up to an hour to recover but that's all it'll take. If she loses a limb, she'll need to sleep overnight, and it will NOT be a very restful sleep. But sleep would be necessary.
Furthermore, she has a very powerful psychic connection to a cyborg

Eyes: Red, often glowing brightly, but will dim out if she is tired. Normal shaped. (?If confused just look at the pic lol)

Piercings, tattoos, scars and disguising features: The oddest thing about her appearance is probably the fact her skin is a faded gray, but that doesn't stand out too much among the dirty children of the streets that she tends to be mistaken for.

Additional limbs or parts: None

Apparel: Simple black dress. She might find new clothes during the course of the RP, but may simply stick to this one dress.

Description: If it weren't for the gray skin and red eyes, she may simply appear as a perfectly normal Japanese-oriented girl around the age of 14.

Picture: Sorry if the descriptions above seem kind of lazy, but I'm of the mind that if you have an image you don't really even need a description.

Spoiler:
Oh and say hello to Mr. B. He's kind of hungry right now so I wouldn't step too close. 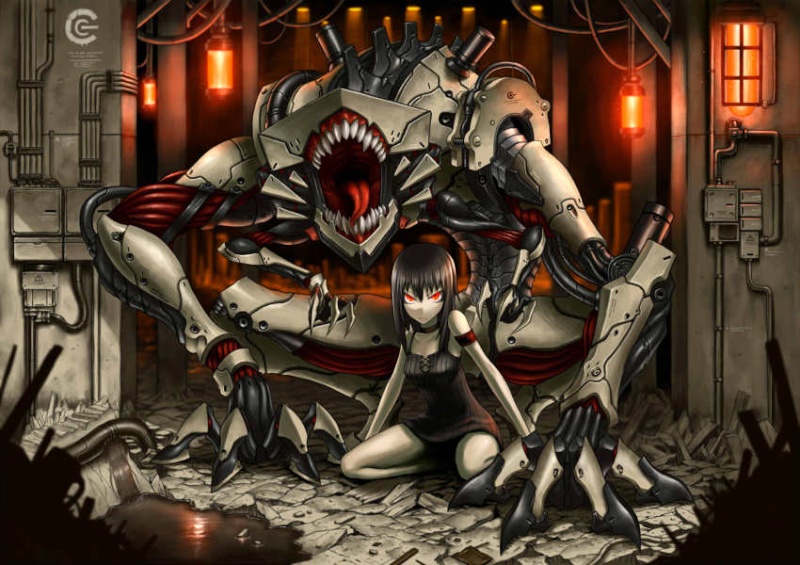 Likes: Mr. B, people that give her things, dogs, chocolate.
Dislikes: Most people she doesn't know, the people hunting her down, anyone resembling a doctor or claiming to be a doctor, and spiders
Fears: Losing Mr. B, death, fire, and spiders. (In that order of importance; these are things she thinks about a lot too)
Strengths: While she may come off a bit awkward, she can remain calm even in the most dangerous situation if she doesn't think it can lead to death (She is completely aware she can regenerate from things and is unafraid of pain)


History: Bluh, I'll do this tomorrow. Sorry but I ran out of steam doing this and doing other things at the same time instead of focusing on this.

The short of it is that a scientist made her and then tried to kill her and then Mr. B killed the scientist and now she's on the run from people associated with the scientist. I don't have any intention of making the people chasing her all that important for anything more than how I introduce her, and maybe occasionally something that gets in her way or something.

Feel free to shoot me down on any of the things I've put in this, I can work around probably most anything unless you just absolutely hate the whole idea altogether for some reason. lol
__________________

Name: Batana (she came up with that all by herself, unfortunately)
Age: 20
Race: mutant
Gender: female
Sexuality: honor-sexual.
Weapon: katana
Powers: She has really good hearing. And also bat wings.

Piercings, tattoos, scars and disguising features: She has bat ears; and her arms are some mix of human limbs and bat wings. Also has clawed feet. Asside from that, however, she's still mostly human looking.


Additional limbs or parts: Also has a tail.
Apparel: Dresses in rather heavily modified samurai armour.
Description: Didn't I just give one?
Picture: No.

Likes: Honor. Also slicing things with that samurai sword of hers.
Dislikes: Dishonor. People who assume she's blind because she's part-bat. (not all bats are blind)
Fears: Does not like cats at all.
Strengths: Very skilled with a katana.


History: After mutating; she went completely insane. Honestly believes herself to be a samurai that mutated into some kind of bat creature.
__________________
In a world torn between Team Edward, and Team Jacob, I have one thing to say:

Name: Mutant Hunter Model 339, AKA, Gee
Age: Looks about 20-ish. Actually older than that.
Race: Android
Gender: female
Sexuality: Not interested.
Weapon: Liquid-metal blades. (ripped off curtesy of Terminator 2)
Powers: Has the ability to release a strange, liquid-metal substance from her arms; which she can form into various shapes.


distinguishing features: Has several circular markings on her arms; to mark where the liquid-metal stuff comes out.
Additional limbs or parts: None
Apparel: Whatever clothes she can get her hands on. Likes trenchcoats.

Likes: Sunshine. Lollipops. Rainbows. Life in general.
Dislikes: Her creators; her original programming.
Fears: Being turned off; being reprogrammed. Spiders.
Strengths: Stronger and faster than a human being. Programmed with knowledge of multiple human martial arts.


History: Built by a mad scientist to hunt and kill mutants for him. After actually meeting a mutant; however, she decided that she didn't want to be a literal killing machine. The man that created her became furious; and shut her off. When she eventually rebooted; she found the scientist about to perform a live dissection on the mutant that she'd befriended.


The scientist then told her if she ever hesitated to kill again; he'd find her target and use them as a test subject. That was around the time she broke free and beat him to death with his own arm. She then decided that she wasn't going to be taking orders from anyone ever again.
__________________
In a world torn between Team Edward, and Team Jacob, I have one thing to say:

Name: Shelke
Age: Age unknown.
Race: Monster/Biodroid
Gender: Appears female
Sexuality: A-sexual
Weapon: Black wires blades, that extend out of puppet fingers. Giant boomerang axe.
Powers: Shadow magic: The ability to manipulate darkness via her black wires by stabbing the blades in the ground and manipulating pools of dark energy and matter. Can be used to create puppets, animals and infect living objects with darkness. It can also be used to manipulate robots and weapon suits that biodroids and androids integrate with for war and even their building machines. It can also be used to make quick sand, crush objects, make barriers and even make larger cuts into big machines

Hair: Long, black going down in the back in a long spiky mane.
Eyes: Black sclera, radioactive symbols for pupils that are neon green in color
Piercings, tattoos, scars and disguising features: Clawed hands and has large fangy psychotic like teeth each looking razor like and able to shred and rip thought flesh and metal once grabbed by them they serve a terrible purpose.

Additional limbs or parts: Fox tail, fox ears
Apparel: Suit of weak armor
Description: A female monster that is doll like in appearance. It has some characteristics of a biodroid as it can wear cyber armor, as well as characteristics of a organic. It has an fully organic brain and even has a soul exposed to contamination by prolonged and over exposure to exotic flowers. It was nearly poisoned to death.

When she allows the strings to come out of her body, her solar battery is in there somewhere.
https://2img.net/r/ihimizer/img203/7454/monstersbynadiezda.jpg


History: The monster always looked human in a way it's really been a very long time since it was mutant however. The creature was a mutant for a very long time and was abused for being one as a child, in fact she is a new class of monster. She is an experiment monster, birthed as a mutant from a mutant father and mother a 2nd generation one. Not much changed when she became a monster except most of her body had to be exchanged for android parts except her ears, tail and brain. They gave her feeling in her body the sensation of hot and cold, she was the first monster man thought he could control in this time and age. She behaved willingly until after she was given weapons, armor and taught how to fight. After a few days she was allowed to enjoy herself, she escaped, easily and indeed enjoyed herself. It was all very exciting and fun. From then on she made herself a underground shelter, using the ruins of a old cyber subway from pre-war days. She hid her gear there and then seemed to exile herself, until now.