Gender: (Has to be female since this is set in an all girl's school)

Skills: Horrible at cooking but is proficient at making tea, takes various lessons from tea ceremony to piano lessons.

Personality: On the outside she seems to be your typical kind and collected ojou-sama, but once you get to know her, you realize she's quite care free and mischievous with a habit to flirt with anyone she takes an interest in. 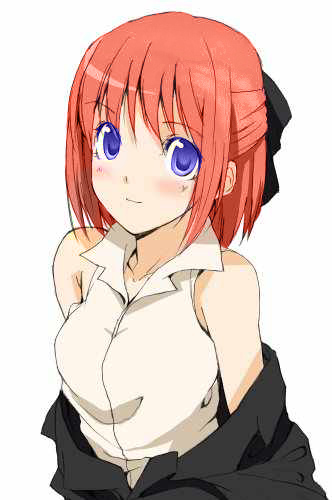 Bio: A young woman from the prestigious Arima family. She is quite wealthy as her father is the CEO of a multinational corporation. She tries to look presentable when around strangers but once she's with her friends, she relaxes and let her true colors show. She recently transferred to Sakuragaoka Girl's High School and has taken an interest in the light music club after seeing how amusing the current members were.

Personality: Hotaru comes off as aloof half the time, and downright mean the other half. She's pretty unsociable when you first meet her, and is still pretty damn unpleasant even if you manage to become her 'friend'. She tends to make rude or biting comments without really thinking about it, and often criticizes others without regards for how they will react. She often refers to her criticism as 'tough love'. If you're lucky enough to win her affection, she will sometimes show you another side, shy and affectionate, with a social awkwardness hidden by her usual harshness and overconfidence. She has a younger brother, and he's the only one that sees her motherly aspects, as she is the only woman in a house with her brother and father. She often cooks for the both of them, and she's a normal, kindhearted young woman when she's just with them, if not a bit brooding at times due to her own 'idiocy', as she calls it.

Bio: Growing up, Hotaru was raised by only her father, and then she helped raise her younger brotherraised by her loving mother and father, with her little brother Masato coming later on. Her mother passed twelve years after she was born, leaving her husband, Hotaru and her newly born son behind. Up until then, her childhood was pretty usual, though she tended to isolate herself more than was normal, and thus often didn't really have many friends, usually one or two close ones at a time. Her isolation only worsened after her mother passed on, but has begun improving (slowly) as of recently. This caused her to be especially close with the family she has left, and she has a good relationship with her father and her brother, spending most of her time with them. After starting at Sakuragaoka Girl's school, she didn't really have an interest in clubs until she started playing the drums, after which she grew interested in the Light Music Club.

Skills: Can play the guitar, bass, drums, violin, piano, and flute, can sing, and is a decent cook. Also, she likes to knit and cross-stitch, but ironically can not sew.

Instrument: Though she can play six instruments, she cast herself as the rhythm guitarist and backup vocalist.

Personality: At first glance, Hotori is an indifferent, slightly snarky girl who seems to think that the world is a boring place to be in. However, once getting to know her, Hotori shows that she hides a perky interior who loves her hobbies and has a mix of interests which includes visual kei, anime/manga, art, and, of course, music. She doesn't have much trouble in the social scene, but she's a dandere, meaning she won't talk to anyone unless spoken to or absolutely necessary and even then she won't show her true side until she is truly comfortable with the person.

Bio: She grew up in a family who has a love for music. Her mother, being more classical, taught her how to play the violin and piano while her father taught her how to play drums. Her two older brothers taught her bass and guitar while she took flute lessons just for the hell of it. She's not a musical prodigy, but many people are impressed at how many instruments she can play when most people can barely play one. As a child, she kept mostly to herself and stayed at home most of the time, barely going out to play with friends. She was teased with the nickname "Hikkikomori Tori", mostly because of her name. In middle school she became a bit more social and then in high school she joined the light music club to change her life a little (having never joined a club before). She joined the light music club mostly because it had few members and she wouldn't have to deal with too many unfamiliar faces.

Gender: Female, but is often mistaken for a male

Personality: A laid back sorta person, she tends take things in strides and shrug off things that would normally stress people out. She's fun loving and not too serious. She doesn't seem to care what people think about her. 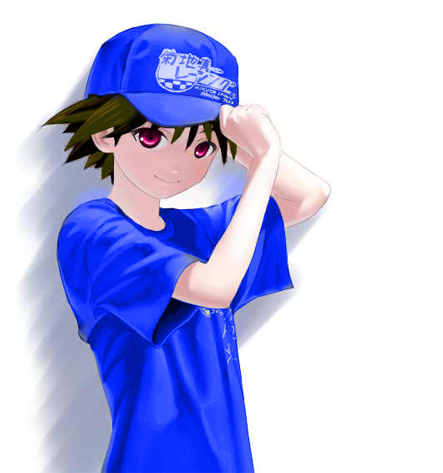 Bio: A cousin of Jun's who decided to come to this school in her freshman year. She hasn't told Jun yet that she is in her school, most likely had forgotten and couldn't be bothered to remember. Most of the students think her a punk or a yankee thanks to her blonde highlighted hair and her uncaring attitude.
__________________