Romance of the Three Kingdoms: A Steampunk RP

Romance of the Three Kingdoms: A Steampunk RP

Basically this is an RP heavily inspired by the Romance of the Three Kingdoms involving reincarnations of the original historical figures. The twist here is that the setting is very steampunk. Reincarnations need not be the same gender as their original nor the same age if that weren't already apparent.

Personality: Lilly considers herself a charismatic, natural born leader, whether this claim holds true is up for debate. Despite her high-class lifestyle, she tries to be modest and empathetic towards the "common folk". Key word "tries", her attempts at being selfless more than likely ends in failure due to her massive misconceptions on the lives of middle and lower class. She always tries to make sound judgements for her and her comrades, but sometimes she'll let her emotions get the best of her, especially when one of those said comrades are in danger. 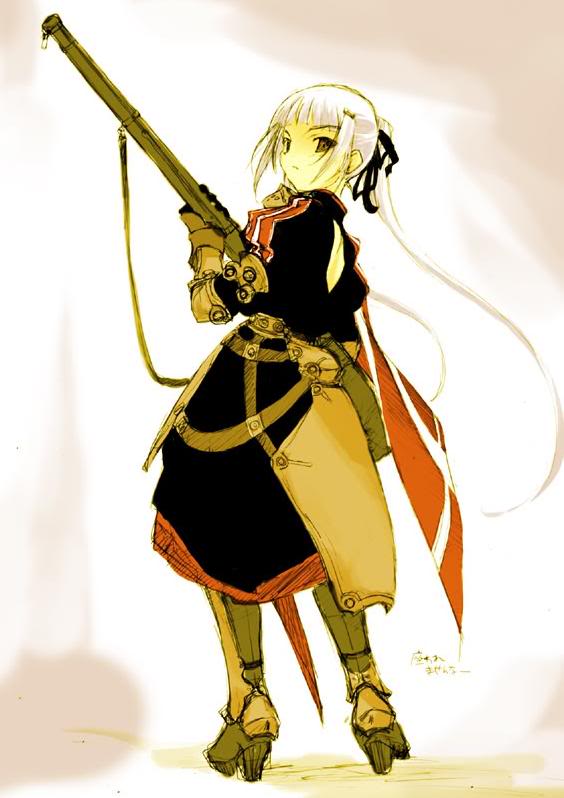 Weapons: A rifle-like gun (pictured) that she dubbed the Golden Dragon.

Abilities: Despite everything, Lilly can be quite the capable leader when the time calls for it. Able to rally others together under her cause with only a few words of encouragement. She is a great shot with her gun, rarely missing her intended target.

Brief History: Lilly comes from the very wealthy Baer family. She never had the luxury of a normal childhood, always surrounded by servants, never allowed to attend public or even private school. Instead she was taught at home by one of the best tutors her parents could find. Because of this, she finds it hard to blend in with middle-class society, so whenever she goes out in public, she tends to stand out because of some of her mannerisms.

Name: Zhi An "Gràinne" Liang (Gratuitous Gaelic is pronounced 'grawn-nya. Feel free to ignore the accent thingy as well. Or just not use that particular name when referring to her).

Personality: Smug. Arrogant. Intolerable. Generally, not someone who'se easy to get along with. Having been home-schooled all her life until recently, Zhi is an incredible genius, excelling academically at frickin' everything. She knows that she's better than everyone, and isn't afraid to hint at it in general conversation. Still, she won't pick fights, and can respect those who are able to, if even briefly, keep up with her intellect. And she's yet to master social activities, so...

Appearance: http://www.zerochan.net/564211#full Funny thing, I don't think Grainne's ever smiled like that, ever.

Weapons: Strictly speaking, not a 'weapon' per se, but she carries a large, white feather fan with her everywhere she goes. Who knows why?

Brief History: A home-tutored child who was apparently taught to be a condescending bitch to 'lesser' people. Recently decided to enter public school to 'study' her inferior peers. Her reclusiveness also seems to have led to odd habits, such as never wearing shoes, and always covering her mouth with her fan.

Personality: At first glance, it's possible to assume that Lilette is quiet, cool-tempered, doll-like girl on account of her appearance. That assumption is most likely proven false(unless she's feeling exceptionally calm) the moment she opens her mouth. Lilette is loud. Very, very loud. And excitable as well. She is also highly impulsive, often speaking an acting before she really thinks things through. She is confrontational towards others(especially adults) and speaks very highly of herself, as if she believes she is capable of fighting off anyone. While she isn't unintelligent, she rarely uses the intelligence she has due to her impulsiveness.

Weapons: Aside from a knowledge of where to hit people and make it hurt when you're not very strong, nothing.

Brief History: Lilette established what kind of person she is very early in life. Her family rarely sees her, aside from meals, and she spends most of her time hanging around elsewhere.

Personality: Corona is something of a polymath, demonstrating a wide range of skills in everything from poetry to administration and combat. Her greatest failing, however, is that her confidence outstrips even her vast variety of skills and a certain tendency to disregard the opinions of others. She's also a magnet for hatred and dislike due to her tendency towards headstrong action that involves no consultation of others. Still, despite these flaws she's got the ability to back it up. Weapons: A bejewelled chainsword. Impractical, yes, but it doesn't need overly much skill if you can get in close. She also has some form of pistol hidden on her person as backup.

Abilities: Her foremost abilities are as a poet and strategist, as well as taking risks. Getting on people's good sides? Not so much. She also has rather a lot of lesser skills as a consequence of her somewhat byzantine education.

Brief History: Corona hails from a family equally wealthy as the Baer one. Her 'tutor', however, was actually a relative that she ended up running rings around and convincing her father of being untrustworthy. Somehow, she's still picked up a wide-ranging education. However, she's better at fitting into normal society than the other scion of a wealthy society...

As for the eye? 'Tis why you should always be careful with knives.